Download LitLearn's "Tone Cheat Sheet" 👇 to power up your tone vocab! Download it inside the LitLearn Discord here: https://discord.gg/Q5qf3aThcs!

Why is tone so important?

So tone means attitude. Great. But why are we even talking about tone in the first place? How is tone even relevant to analysis?

Tone is important for two reasons.

1. Tone is a technique

The tone of a text is never accidental. The writer consciously chooses how the text should sound, and because it’s a choice, tone is therefore a technique summoned by the writer at will to achieve a specific purpose. And because tone is a technique, it therefore must to be analysed in all commentaries and at least once in every point.

But wait, there’s a catch: Tone isn’t like your average technique (e.g. metaphor and simile). Tone is what I call a “meta-technique”: Tone is actually created from one or more 'normal' techniques. If normal techniques like metaphor and simile are the ingredients in a soup, then the tone is the taste of that soup, the overall flavour of the mixture; tone is the overall result of mixing together normal techniques like diction, imagery, irony, etc.

In our first Kanye example, the hopeless tone didn’t pop out of nowhere; it was born from Kanye West’s sophisticated use of ellipses—a grammatical construct that is indeed a literary technique that we’ll encounter very soon.

2. Tone is the most useful interpretive tool 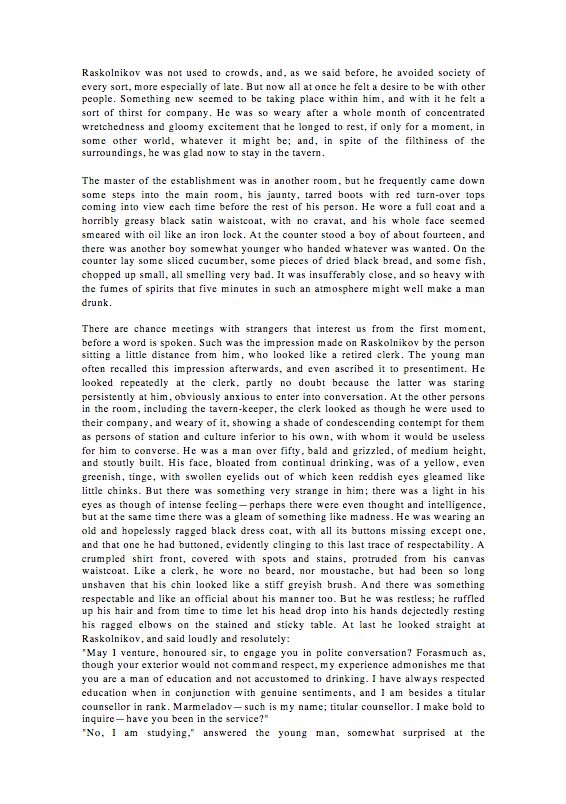 It has lots of words—in fact, too many words. (Don't actually read the words. It's a random extract for this conceptual demonstration.) There are so many words that our puny brains can’t possibly digest it all at once. But wait! What if we figured out the tone for each section (these are hypothetical tones, by the way)? 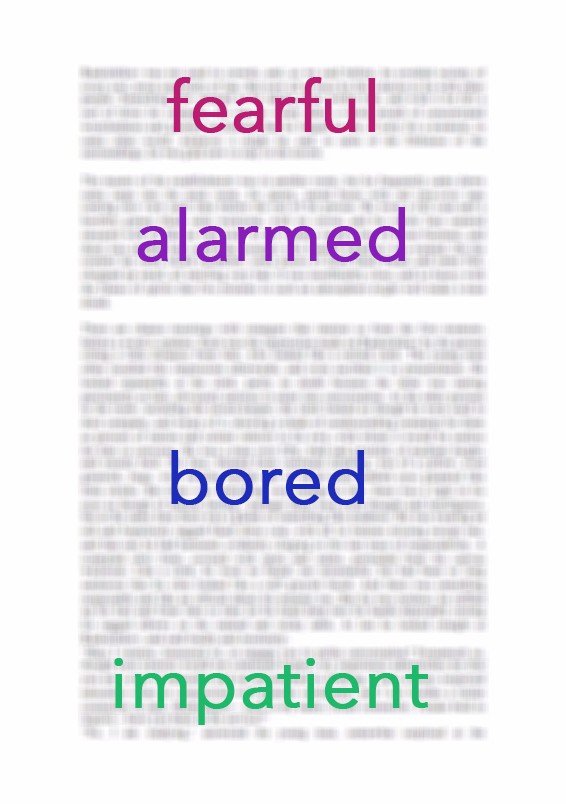 Voila. Immediately, we can get to the core, the heart of what the writer is trying to tell us. We can grasp the main idea much more easily by figuring out the tone, or multiple tones, in a passage. We will cover this in more depth when we learn about deconstruction.

How is tone related to atmosphere and mood?

Here's a diagram connecting tone, mood and atmosphere together. We will refer back to this diagram. 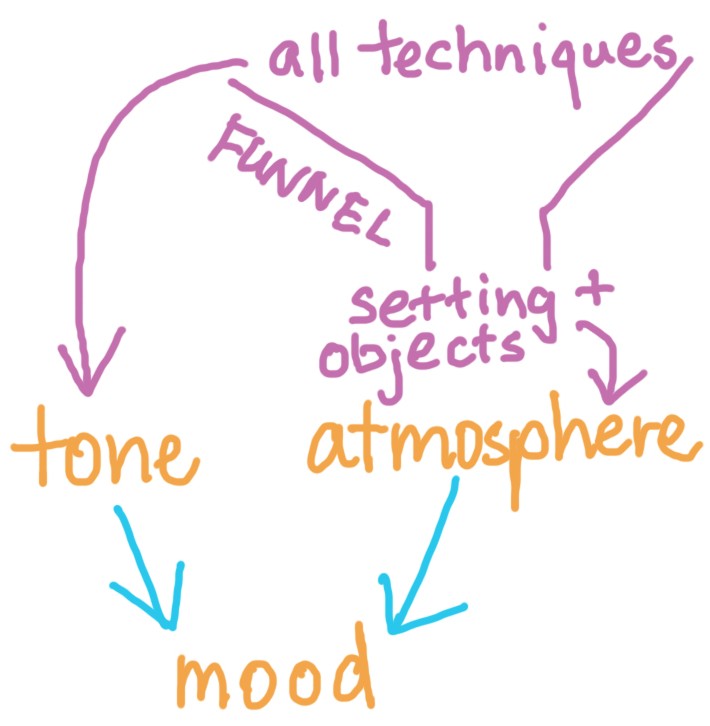 How to use: Just add one of these words before "tone" and voila, you will sound really smart.

Neutral or 'in the middle'

Now, let’s talk about “atmosphere”, but before I do that, I want to show you a list of the top unanswered questions to ever exist.

What does the “atmosphere” of a text mean?

But the thing is: I never found it difficult at all. It's actually straightforward and I'll explain why.

First, how do we normally use the word “atmosphere” in everyday life? Well, we usually say something like:

And so atmosphere is almost always used to describe the feeling or vibe—the awkwardness, the creepiness, the bursting energy—that is imposed upon us in a physical environment, situation or space ("room", "Times Square", "haunted house"). So clearly, the setting (environment) of a text is what establishes the atmosphere. Settings are usually constructed via the description of objects in the setting (e.g. a creaking floorboard in the haunted house), and so we can define atmosphere simply as this:

Atmosphere is the (not necessarily emotional) feeling of an environment, as constructed by a writer's description of the environment and objects within that setting.

Time for an example. See what I did there? Time... Times Square...

(Note my apologetic tone here. It is clearly dramatic and creates a humorous atmosphere. Describing the humour as an atmosphere makes sense here because the humour is external, shared between you and me, and not just experienced internally in either one of us. This brings up an important point about the distinction between mood and atmosphere that we'll see at the end of the lesson.) 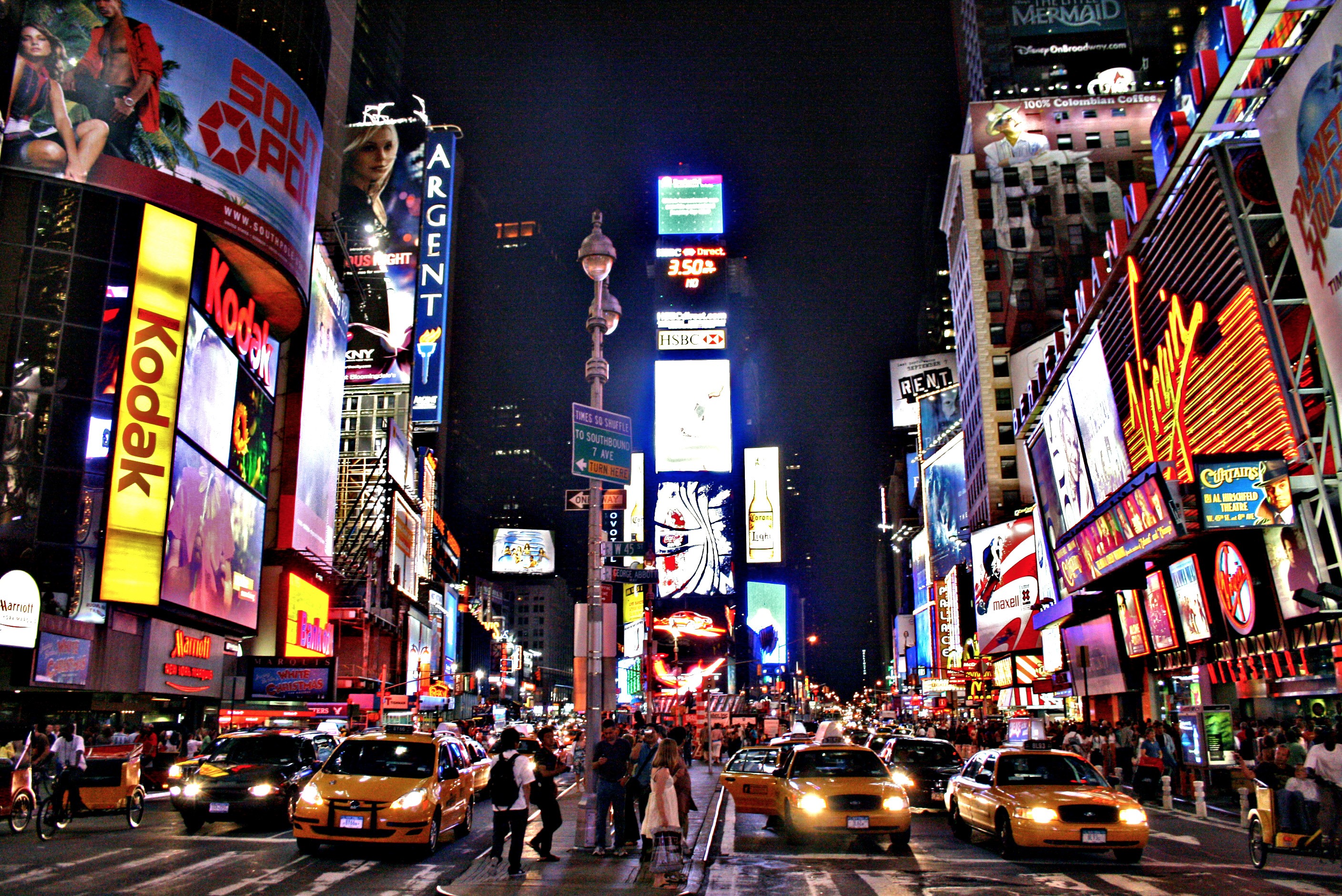 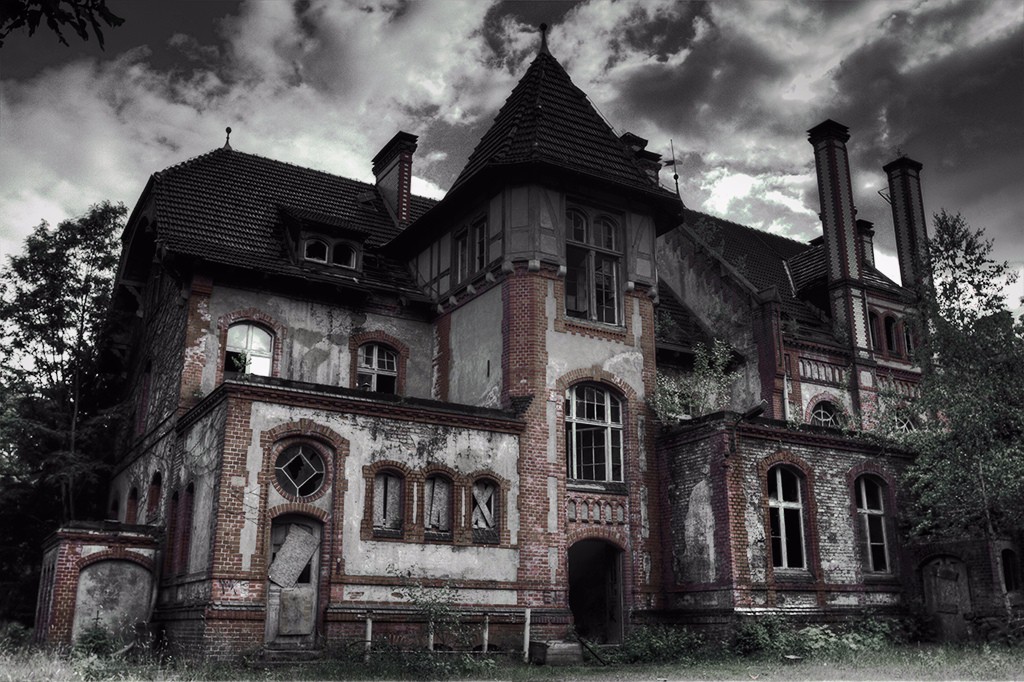 The external feeling is again the atmosphere: the creepy, uncomfortable sounds and the cold wind. This is an eerie atmosphere. The mood, aka emotion, that the external atmosphere creates inside the reader is fear.

Relax on the definitions--it ain't science

Often it’s hard to decide whether something is best described as tone or atmosphere, and as atmosphere or mood.

In these cases, any choice will work because they are so similar that you can’t go drastically wrong even if you tried to sabotage yourself. Tone, mood and atmosphere is that type of alleyway in literary analysis that is sometimes well-lit and clear and clean to walk through, but on occasion the streetlights are off and when you try to walk through the darkness, you stumble over garbage bags and you get hurt and really confused. So while these concise definitions I've given you are great for 80% of the time, they don't help you in the other 20% of the time because the tone, mood and atmosphere just overflow their definitional boundaries and overlap and mix. Such is the nature of English literature--a fundamentally subjective subject. In such cases, it's safe to bask in the confusion and use it to your advantage: Just pull out any one of those 3 things and link it however you like--reasonably, of course! The point is: Tone, mood and atmosphere is the singular area of literary analysis that requires a flexible, open mind and a blurry interpretation of the definitions, because the concepts themselves are highly ambiguous.

Relationship between mood and atmosphere

Example from the Principal's office. I rudely interrupted our deep discussion about the boy and the principal in the tone section of this lesson. Let's resume the discourse.

The restricting atmosphere that we experience vicariously (meaning "through another person", in this case, the boy) can create different moods depending on the context.

Examples: How to distinguish atmosphere and tone

There is almost always a mood created by a piece of writing, unless you’re analysing a boring textbook. The question is: How is the mood created? Is it created by the tone or the atmosphere? (Recall the diagram from the end of the Tone section of this lesson.)

The mood can be created:

“This city is so disgusting and infested. Ugh! I would never go there!”

“The silent air of the city had a dusty, stagnant feel to it, as if the pulsing river of life that had once coursed through its archways and corridors were now impeded, blocked, by the mounds of dusty rubble.”

Combination of both tone and atmosphere

“The silent city was a dilapidated, defiled mess, a collection of infested rubble that seemed to be screaming helplessly into the heavy, dusty air for the return of human life.”

This set of 3 examples hopefully makes it the distinction between tone and atmosphere clearer in your mind.

Choice: When to analyse tone or atmosphere?

Here’s another example emphasising the difference between a tonal and an atmospheric passage.

“It was the most frightening hour of my life! I crept slowly along the wall, making sure he—or whoever or whatever he or it was—couldn’t hear me. I was so certain he, or it, was right there that my heart beat like a thumping elephant…half-expecting something to jump out at me from the bushes.”

“The night was cold. A silver sliver of moonlight pierced the clouds here and there so that the garden was completely shrouded in darkness in some places and yet naked and exposed in others. Luke kept close to the wall as he crept slowly, slowly, towards what he thought was the thing. Suddenly, he stopped. He stared intently at the bushes and braced himself for the worst, as if expecting some unworldly monster to run out from under those dense leaves and bite him.”

Internal versus external is the easiest way to decide when it is appropriate to analyse the tone or the atmosphere. With that said, in many texts, both tone and atmosphere are used together to create mood.

The goal of this lesson was to give you an intuitive understanding of tone and atmosphere, and their direct relationships with mood.

Tone is how the voice of a character or narrator sounds, which impacts the reader. On the other hand, atmosphere is how the external situation or environment feels. Both tone and atmosphere influence mood, but in slightly different ways.

Tone and atmosphere are important techniques as well as tools for deconstructing a text.

Tone and/or atmosphere should be analysed to some extent in all texts, whether it’s a Paper 1, a Paper 2, assignments, or anything else in English analysis. In the Advanced Analysis section of the course as well as in the Full Analysis videos, I will teach you the details for how to properly analyse tone, atmosphere and mood. 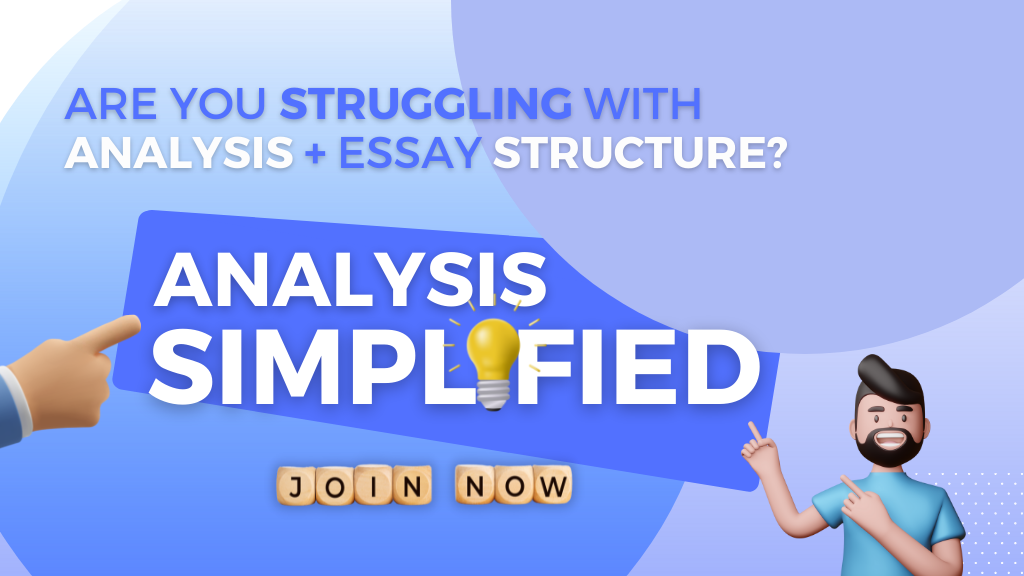